On the West Coast, some Hardwood lumber suppliers reported that the market has slowed down, but one lumberman called his sales “robust.” A distribution yard representative in Oregon said, “In spite of all the hurdles, we’ve done fairly well. I’d say our market is robust. We’re very happy where we are, from month to month. We have had a personnel shortage, supply shortages and increases in prices on lumber and plywood. In spite of all that, we haven’t seen anything fall off. It’s been good.”

Compared to a few months ago, “I’d say that, dollarwise, our sales have been consistently good. We’re above year-to-date, six months ago as well as today. I would just say with confidence that we haven’t slowed down.”

He handles FAS Poplar, Superior Alder, Superior 1 Face Alder and Select & Better Red Oak. “Those are our top species,” he stated. He sells lumber in 4/4 and 5/4 thicknesses, catering mainly to cabinet manufacturers.

Besides cabinet manufacturers, he sells to furniture makers, commercial fixtures manufacturers and other yards. Asked how his customers are doing sales-wise, he replied, “They keep cutting PO’s.

“Transportation is a huge problem,” he remarked. “There’s a major shortage of truck drivers. We’re independent and we compete with giant corporations, trying to absorb truck drivers. It’s very competitive. We strictly do business in Portland, Seattle and Eugene, OR. They give us about as much business as we can handle. Business is good. What is affected is our ability to grow. Finding employees is a challenge; if you open another location, you need employees. Between trucking and dramatically increased wages, everything costs more.”

In Washington, a lumber provider said the market was “not bad. The last quarter was pretty good. On the front end of this quarter, the market seems like it’s still pretty active. Last week was a little quiet. That’s typical after pushing product out the door for the end of the quarter. However, we’ve got orders we’ve got to ship that people had ordered and anticipated needing, so that’s a good thing. We’ve still got a decent order file and we’re anticipating we’ll build the order files up.”

Asked to compare his market with that of several months ago, he said, “Last quarter was pretty dang strong. I don’t know if that was a peak or not. Six months ago, that was pretty solid, too. We’re still maintaining.”

The main species of lumber he handles are Poplar, Hard and Soft Maple and Red and White Oak. Poplar and the Maples are his best sellers. “We’re moving mostly No. 1 and Better in mainly 4/4 and some 5/4,” he noted.

He sells mostly to end users and some to distribution yards. His customers’ sales seem to be good, he observed. As for transportation, he termed it “horrible.”

In California, a Hardwood lumber provider commented that his market was “not as busy. I think that people are distracted by the Ukraine situation, and interest rates may be going up a little. It’s only temporary.”

Compared to a few months ago, he said the market was the same.

He handles Walnut, Hickory, White Oak and Poplar in uppers No. 1 and 2 and FAS. All his lumber is in 4/4 thickness.

He sells lumber to flooring manufacturers and retail lumberyards. “They’ve been very busy,” he stated. “I’m still able to sell a good amount of lumber. It’ll get busier soon. The orders are coming.”

Unlike other parts of the country, “We’re lucky in Southern Cal; there’s a lot of trucks here. But it takes longer to get the containers from the sawmills. It’s a major hassle because of lack of containers.”

The number of U.S. secondary schools embracing trade skills curriculums is growing rapidly, according to the Home Builders Institute (“HBI”). The chief executive of the

Market trends across the Southeast region remain strong for Hardwood lumber sales, as some sawmills are taking steps to stave off potential profit loss due

In the Lake States region, lumber providers have observed that lumber is moving and, in some cases, moving extremely well. In other cases, it is 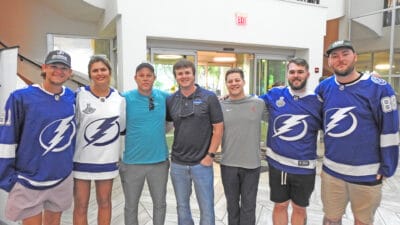